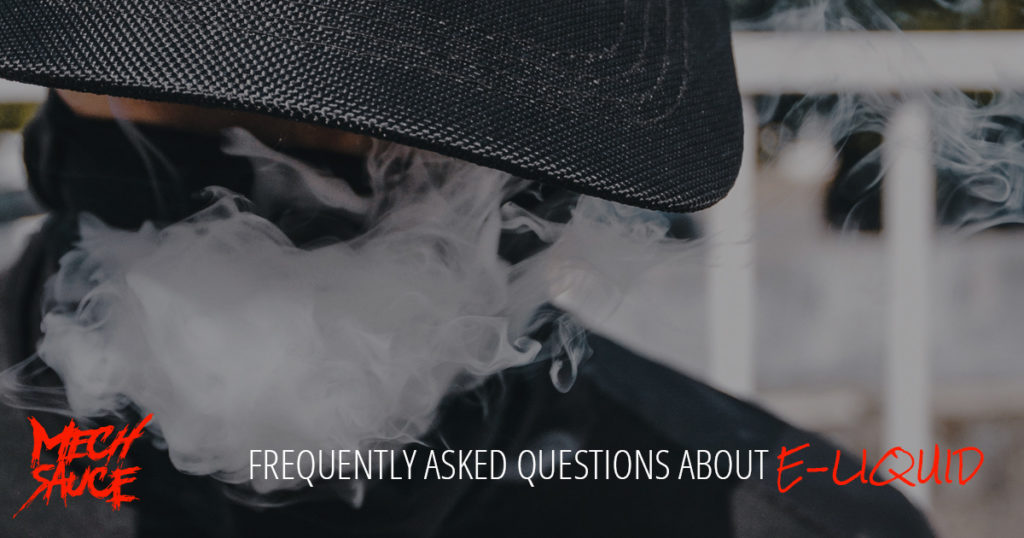 At Mech Sauce, we make some of the most delicious e-liquids in the world from the best ingredients available. Every one of our bottles is filled with the highest quality ingredients on the market and blended to give you the absolute best flavor and the biggest clouds possible. We also price our vape juices lower than other companies because we believe in passing on our savings to you. Because we make all of our flavors at our own facility right here in the United States, we don’t have to charge an arm and a leg. Read on to learn the answers to some of the most frequently asked questions we get about e-liquids, then order a couple bottles and get ready to discover how good e-liquid can be!

What Are E-Liquids Made From?

Mech Sauce e-juices are made from a small list of ingredients. They include vegetable glycerin, pharmaceutical-grade nicotine, and flavors. All of the ingredients that we use are rated to be consumed by humans and are handled, carefully mixed, and bottled in our sterile environment. Vegetable glycerin is a clear liquid with a sweet taste that comes from plant oils. It is a common ingredient in many foods (where it is used as a sweetener) and cosmetic products, including lotions, toothpastes, and shampoos. Nicotine is a naturally occurring stimulant found in some plants. You can read more about nicotine here.

How Safe Is Vape Juice?

We don’t know yet. There are some studies that have shown that they contain many times fewer carcinogens than a cigarette, but other studies have found other reasons to worry or don’t have enough data yet. Anecdotally, many people have used vaping to quit smoking cigarettes and say that they have noticed an improvement in their lung function. Many have also become completely free from nicotine by using e-liquids, so it has been used to break people of their addiction to nicotine. That being said, we cannot say that vaping will stop you from smoking.

Is Vaping Cheaper Than Smoking?

There is a lot of anecdotal evidence that suggests that you might save money if you stop buying cigarettes and start using e-liquids. This has been attributed to several factors. First, e-liquids are usually consumed at a much slower rate than traditional cigarettes because they are more concentrated and because it usually takes longer to vape than it does to smoke a cigarette. Second, many people have noticed that once they started vaping, they required less nicotine over time, which meant that they vaped even less, saving them more money. We hope that this blog was informative but we also know that it would be impossible to cover every question that people have about vaping. If you are still curious, talk to some friends or do some research online. Be warned: there are sources on both sides of this issue that each have some valid points and some that are trying to spread lies that help their side. Read as much as you can and come to an informed decision. In the meantime, if you want to try vaping, pick up a couple bottles of Mech Sauce e-liquid for some super-delicious flavors that we’re sure you will love!
Prev Post
All Posts
Next Post
Top